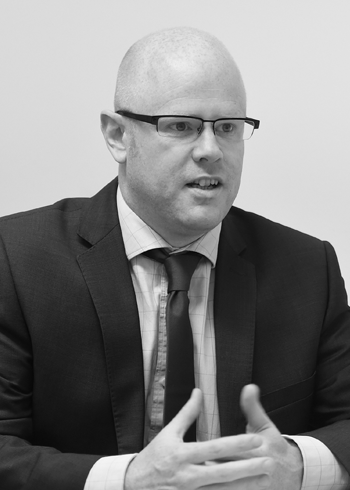 Andrew is a commercial litigation partner based at our Blackburn office.  Having specialised in commercial litigation for over 10 years he handles a broad range of disputes for businesses, including those arising from corporate transactions, boardroom and shareholder disputes, civil fraud, insolvency, education law, energy sector disputes and professional negligence cases such as claims against solicitors.  Andrew is highlighted in legal industry guide 'The Legal 500' as a key individual in the legal sector as a 'rising star'. Andrew is an Associate Member of the Chartered Institute of Arbitrators (CIArb)

As a specialist in commercial disputes, Andrew acts for business ranging from SMEs through to large multi-nationals and has experience in handling international cases. Some recent examples of Andrew’s cases include:

In the reported case of Thursfield v Thursfield [2013] EWCA Civ 840, [2012] EWHC 3742 (Ch) [2012] EWHC 3621 (Ch) [2011] EWHC 3539 (Ch) Andrew sought to enforce a US$5.7m judgment of the Michigan Court for breach of a settlement agreement following a divorce.  The case involved obtaining a worldwide freezing injunction, tracing assets in the UK, the committal of the defendant to prison and obtaining a disclosure order based on the decision in North Shore Ventures.

Andrew has clients across industry sectors and has niche expertise in the education and energy industries.  In these sectors he has developed skills in relation to public and administrative law which complement his commercial expertise.  In 2012 Andrew successfully represented Keele University in a reported claim for judicial review [2013] EWHC 56 (Admin).

Andrew’s energy practice has involved acting for suppliers of gas and electricity to commercial businesses across the UK, handling various matters such as alleged breaches of duty surrounding data collectors, distribution network operators and/or gas transmission companies.  In this field he has developed expertise in commercial arbitration an area of dispute resolution in which he continues to build a practice advising and representing SMEs.  His experience of this form of dispute resolution sets him apart from competitors in the local market.

Andrew complements his commercial disputes practice with contentious insolvency work.  In addition to representing creditors and debtors in contested insolvency proceedings and representing directors in the defence of claims brought by insolvency practitioners, Andrew has obtained validation orders for companies faced with winding up petitions allowing them to make business critical payments and trade out of financial difficulties.

Andrew joined Napthens in 2015 from SGH Martineau in Birmingham and was promoted to partner in 2020. Prior to joining Napthens Andrew trained and spent his career with SGH Martineau and its predecessor practices specialising in commercial disputes.  He is originally from Lancashire and when the opportunity arose to join a law firm to genuinely compete with commercial practices in Manchester and Liverpool, he decided it was time to return home.

Andrew is a member of the Professional Negligence Lawyers Association and is currently in the process of becoming an associate member of the Chartered Institute of Arbitrators.

How do you like to relax out of work?
I am a supporter of Accrington Stanley Football Club.  I have seen the club develop from playing tiny venues like Mossley and Matlock to beating the likes of Portsmouth and Bradford City in league fixtures.  It’s a wonderful football club to be a part of.

What aspect of your job do you find most rewarding?
I love the strategic planning of litigation.  In some cases the future of the business can be in jeopardy and using legal concepts combined with economic and commercial reality to identify a strategy which results in commercial advantage to my client is massively rewarding.  Litigation at it’s most fascinating is a mix of chess, poker and a good argument!

We use cookies on our website to give you the most relevant experience by remembering your preferences and repeat visits. By clicking “Accept”, you consent to the use of ALL the cookies. However you may visit Cookie Settings to provide a controlled consent.
Cookie settingsACCEPT
Manage consent

This website uses cookies to improve your experience while you navigate through the website. Out of these cookies, the cookies that are categorized as necessary are stored on your browser as they are essential for the working of basic functionalities of the website. We also use third-party cookies that help us analyze and understand how you use this website. These cookies will be stored in your browser only with your consent. You also have the option to opt-out of these cookies. But opting out of some of these cookies may have an effect on your browsing experience.
Necessary Always Enabled
Necessary cookies are absolutely essential for the website to function properly. This category only includes cookies that ensures basic functionalities and security features of the website. These cookies do not store any personal information.
Non Necessary
Any cookies that may not be particularly necessary for the website to function and is used specifically to collect user personal data via analytics, ads, other embedded contents are termed as non-necessary cookies. It is mandatory to procure user consent prior to running these cookies on your website.
Other
Other uncategorized cookies are those that are being analyzed and have not been classified into a category as yet.
Advertisement
Advertisement cookies are used to provide visitors with relevant ads and marketing campaigns. These cookies track visitors across websites and collect information to provide customized ads.
Analytics
Analytical cookies are used to understand how visitors interact with the website. These cookies help provide information on metrics the number of visitors, bounce rate, traffic source, etc.
Functional
Functional cookies help to perform certain functionalities like sharing the content of the website on social media platforms, collect feedbacks, and other third-party features.
Performance
Performance cookies are used to understand and analyze the key performance indexes of the website which helps in delivering a better user experience for the visitors.
Save & Accept